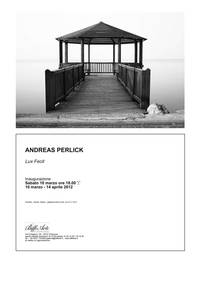 Without any doubt, light is the principle force making photography possible. It is reflected by the world and perceived either by our eyes or by sensitive materials like photographic films. This has been reflected from the very beginning of this art by the term drawing with light. But it is a general principle that coins have two sides. Simply light might provide us with important information about our world, but it will fail to result in impressive and moving images. The second principle, which counteracts light and thus defines the quality of its action, is the best friend of black and white photographers, the shadow.

With his photographic work Andreas Perlick explores this dichotomy of light and shadow in order to find visual treasures in the world around us. By concentrating on very special moments when light and shadow do allow tiny glimpses into the magic which often hides in the mundane, he allows us to enter a world of beauty and meditation. This alternative world around us Minor White might have in mind when saying: One should not only photograph things for what they are but for what else they are. The focus of this work does not lie on the stunning vistas of exotic destinations. Both in nature and in an urban surrounding, Andreas Perlick’s ambition always tends towards the details, the small spaces. But even showing only small sections of the world these tend to have the character of extracts creating the idea of the whole in the sensitive beholder of the small, intimate photographic images. In many cases one gets the idea that not the depicted piece of the world is the main reason of the image but that it is meant to activate very individual meanings, ideas, memories, even feelings in the beholder. They act as windows into one’s inner world thus having markedly different meaning with different individuals. This intention is further supported by the organisation of his work in series. The focus on a theme via a number of different prints uncovers characteristic traits and underlying meanings which individual images hardly could. These ideas very concisely are subsumed in the programmatic title of the work of Andreas Perlick, CHIAROSCURO – Little Moments of Blissfulness.

Andreas Perlick works exclusively in black and white and still positions himself in the analogue world of ancient photography. He carries out film processing, print processing, mounting and presentation by himself. This is important to realize the subtle balance of light and shadow, which is so important for the specific atmosphere defining his images and to accent the graphical character of the motifs. As an autodidact, his visual language has not been influenced by workshops or schools but has developed slowly during his photographic work. Important for this positioning was and still is an intense interest in the work of other photographers and artists. It would be inadequate to name individual ones, but particularly influential are the US west coast photography, the post-WW2 fotoform group in Germany and the photography of Eastern Europe. Andreas Perlick lives with his ever supportive wife Brigitte near Nuremberg in Germany.

With this international solo show LUX FECIT Biffi Arte Galleria presents a deeper view into Perlick's portfolios dealing with various aspects of architecture, particularly the series RaumLicht, meaning SpaceLight and lux in domo domini. In addition, the first samples from the new portfolio Chiaroscuro nella Serenissima are included. Expectedly light is the major theme of these images. It can be responsible for an exquisite atmosphere in staircases or churches captured in impressive black and white prints. Or the light can be the accomplice of the photographer, behaving like a sculptor by changing some detail of the world into something precious worth to be photographed. So light is not simply the physical principal of photography but responsible for the quality of the motif, light has prepared it, LUX FECIT.